Some tips and points on hat etiquette..

The time of day at which your guests will be attending should directly affect the style of hat that they’re wearing. Typically, as the day progresses the hats should get smaller. A day wedding could require a larger brimmed hat whereas a wedding taking place later on in the day a smaller headpiece would be sufficient.

Wedding hats on women are typically considered an accessory and as such aren’t expected to be removed when they go indoors. In the case of men, however, it’s expected that they remove their hats when they enter a building, especially a religious one, which means no top hats indoors, even for photographs. 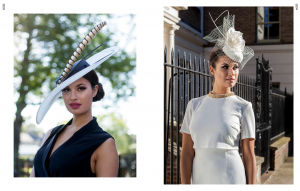 The mother of the bride dictates when other ladies may remove their hats and headpieces. Until she removes her hat, other ladies are expected to leave theirs on.

Where men may have many hats available to match a variety of outfits, women may match only one hat with a single outfit. By a similar rule, women’s hats worn strictly for warmth should be removed when indoors.

If you’re wanting to go with these traditional rules, it’s important your groom and groomsmen know the strict etiquette they must adhere to as well. As well as removing their top hats when they enter a building, they should also always remove their top hats when in the presence of a lady, especially if it’s their new mother-in-law. It’s an age-old rule that dates back generations and is intended to show respect.

For men’s hats, any ornaments or decoration on the left side of the hat. The opposite is true of women’s hats, hat pins and other ornaments should be placed on the right.

A rule for gents and mothers in particular, it’s considered rude to show the lining of your hat to anyone. When removing, tipping or doffing your hat, always ensure that only the outside is visible. If you remove your hat for any reason, hold it with the lining facing towards your torso.

Women should wear a hat to Royal Ascot and smart race meetings; hats are traditional. Hats for wedding guests are encouraged but by no means compulsory, and a matter of personal choice for christenings and funerals.

A Cara Meehan London headpiece should be worn just above the eyebrow. Please make sure you are wearing the hat right, contact me if you are unsure.

For small headpieces please make sure that they are resting or just touching the eyebrow, I try not to get irate when walking around Ascot racecourse seeing my headpieces worn way to far back or on occasions put on backwards!

For larger brim hats I prefer hats worn to the side so more of a saucer style. The shape is so dramatic yet elegant and makes vision and air kissing much easier.

And finally, the golden rule of etiquette. Couples should not point out the faux pas’ of guests who may not have read these key rules!